Cocos nucifera or commonly known as coconut palm is native to Originally Western Pacific but now known as Pantropical. It is part of the Araceae family. 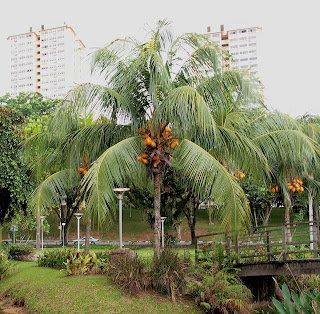 The tall, slender, grey, stem reaches a height of 30m. It is often ringed with old leaf scars that is produced when the leaf dies off, leaving a neat rectangular pattern of circular scars as they fall off cleanly from the trunk. Fronds are large and are up to 5 m long. Yellowish-green to dark green in colour, ascending to spreading to drooping, bearing 80 to 100 pairs of leaflets that taper to a split tip. They have prominent elevated midrib and the leaflets are simple, 1.5 to 5 cm wide, 50 to 150 cm long. Spreading, 1.2 to 1.6 m long, the inflorescence are cream to yellow.

Arising from within the lower fronds, and consisting of 5 female flowers, each set of five are between 2 smaller male flowers which are enclosed by two bracts that are 60 to 90 cm long for protection purposes. The inner bract is woody and pointed while the male flowers will open about 10 to 20 days to encourage cross-pollination, before the female flowers open.

Fruits are egg shaped, that measure up to 30 cm long, ripening from light green or yellow to brown. They consist of a smooth outer skin (exocarp), a fibrous husk (mesocarp) and a hardy woody shell (endocarp). The seed has a narrow, white layer of edible endosperm (known as coconut flesh) and a large cavity filled with water. (known as coconut juice)

Other than the popular coconut juice, flesh, oil and milk, the coconut has also other uses like the youngest part of the shoot makes a succulent vegetable and is edible. The midribs of the leaves can be used for making brooms or it can be cut into short sticks to make skewers for the kitchen and darts for blow-pipes. The leaves are also utilised for roofing thatch and for weaving of baskets. The thick outer husk is a source of fibre which can be used to make doormats, brushes, ropes, carpets. The water can be used in culutre media for growing of orchid seedlings or in tissue culture. Almost all parts of the Coconut palm can be used.
Posted by Riverine Parks at 13:53